In 2008  Monkton Heathfield Phase 1 received outline planning consent from Taunton Deane Borough Council. Attached to this consent was a requirement on the developers to provide 2 senior football pitches and a club house with changing facilities. (it was perceived there was a need for football pitches at this time) A figure of £460,000 (index linked) was stipulated to provide the club house and ground works for the site. Unfortunately this amount has proved to be insufficient and the project, despite full planning permission being granted in 2017, progress has stalled with the developers being unwilling to provide additional funds and the current District Council Somerset West and Taunton Council (SWT) is unable to fund the project in these difficult times.

In 2019 the Parish Council decided to extricate the project and began to investigate the sports needs of the community, it became apparent that senior football in the Taunton area is well provided for, TDBC Playing Pitch Strategy 2010 also confirms that there is an over provision of senior football pitches in the district. The local Rugby and Cricket clubs were contacted to seek their views, the Rugby club is desperate for a junior rugby pitch and as many of you will be aware junior rugby games and training are often cancelled due to the state of the current pitches. The club now has approximately 350 youth players from 6-18 all trying to use two pitches only one of which has lights, the main pitch principally used by the First Team who play at the third tier on National Rugby (that’s just two below the Premiership) and as such the playing surface has to be protected as best it can. Despite the hard work of the Ground Team, a wet winter makes the pitches unplayable. The Cricket club also has ambitious plans for a third team, ladies cricket and a junior team and would like access to another pitch to accommodate these needs.

The Parish Council’s own findings from surveys in the community including the Neighborhood Plan reflect the need for rugby and cricket pitches and not football. There are currently 3 football pitches in the immediate area which are not being used, a senior and under 11 pitch at Creech St Michael and a senior pitch at Tudor Park. (This pitch is about to become available after the developer has recently completed remedial work attached to the development).

It is the intention of the Parish Council to immediately commence work to provide the playing pitches and then erect the club house as soon as funds allow, match funding will be applied for from Sports England and other available grant funding etc. The Rugby club has kindly offered to maintain the pitches in recognition of the use being offered. It is envisaged the Rugby club would have exclusive use of the pitch on a Sunday and one evening a week for training and in the summer the Cricket club would have a similar arrangement. Outside of these times the pitches would be available for the community to use. There are also proposals to provide Tennis Courts and a Bike Track or Skate Board park on the same site.

The Parish Council is in dialogue with Sports England, Rugby Football Union South West and the England and Wales Cricket Board for the region and initial responses are very favorable.

Your Parish Council has recently made a pre-planning application to SWT to amend the use of these pitches, confirmation has been received from the two developers Persimmon and Redrow that they have no objection to the proposal and are willing to pass over monies they have allocated to the project.

This is an exciting overdue project for the community that the Parish Council is happy to project manage and we are all hoping for a favorable response from the SWT.

The attached plan shows layout of the site which is situated between the Eastern relief road and the canal. 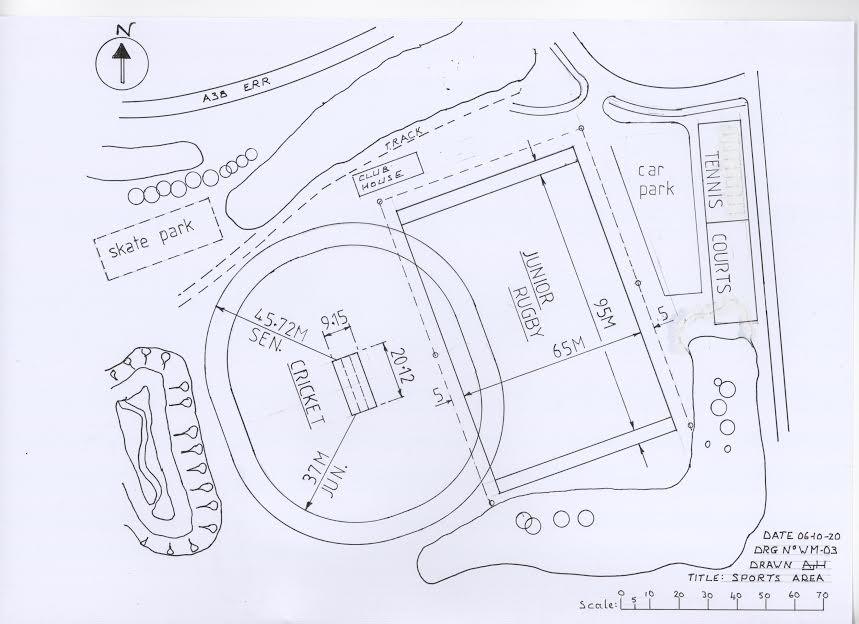 Sorry, there are no polls available at the moment.
Share This